1.1 Purpose of this Report

1.1.1 This report has been prepared by Arcadis Consulting (UK) Ltd. ('Arcadis') on behalf of Ipswich Borough Council ('the Council') as part of the combined Sustainability Appraisal (SA) and Strategic Environmental Assessment (SEA) of the emerging Final Draft Ipswich Local Plan. The process has so far culminated in the production of the Final Draft Ipswich Local Plan (the Plan), which will replace the Local Plan, which was Adopted by the Council in February 2017.

1.1.2 The SA process for the Plan is set out in Table 1-1. It commenced in August 2017 with the preparation of the Scoping Report by the Council, which established an appropriate scope and level of detail of the SA. The Scoping Report was updated in February 2018, in response to comments from the general public and statutory consultees, received during the ten-week public consultation period. A summary of the Scoping stage is set out in Chapter 2 of this report. An Interim SA Report[1] was prepared to accompany Regulation 18 consultation on the Preferred Options Plan[2]. The Interim SA Report predicted and evaluated the likely sustainability effects of the Preferred Options Draft Ipswich Local Plan (Regulation 18) and their reasonable alternatives, to help the Council with their selection process. The Interim SA Report has been updated and refined in line with changes made to the draft plan to form the Final Draft Ipswich Local Plan (Regulation 19), following the Regulation 18 consultation to form this SA Report. This SA Report is intended to accompany the Final Draft (Regulation 19) Ipswich Local Plan consultation.

1.2 What is Sustainability Appraisal and Strategic Environmental Assessment?

1.2.1 Sustainability Appraisal (SA) is the process of identifying the social, economic and environmental effects of a plan to ensure that sustainable development is at the heart of the plan-making process. It applies a holistic assessment of the likely effects of the plan on social, economic and environmental objectives. Section 19 of the Planning and Compulsory Purchase Act 2004[3] requires a local planning authority (LPA) to carry out SA of a plan. The Town and Country Planning (Local Planning) (England) Regulations 2012[4] dictate that, after adopting a plan, the LPA must make the SA Report available.

1.2.2 Strategic Environmental Assessment (SEA) is a legal requirement set out in The Environmental Assessment of Plans and Programmes Regulations 2004[5] (the SEA Regulations), which transposes Directive 2001/42/EC on the assessment of the effects of certain plans and programmes on the environment[6] (SEA Directive) into UK law. As per Annex 1 of the SEA Directive, SEA is a systematic process designed to 'provide for a high level of protection of the environment and to contribute to the integration of environmental considerations into the preparation and adoption of plans and programmes with a view to promoting sustainable development.'

National Planning Policy Guidance (NPPG)[7] states that SA should incorporate the requirements of SEA into one coherent process. This SA Report satisfies the requirements of an SEA Environmental Report. The SA has been applied as an iterative process during the preparation of the Plan to help contribute towards the objective of achieving sustainable development, as per Figure 1-1. Stages that have been or are due to be completed are presented in Table 1-1.

1.3.3 The Council is committed to the Recreational Disturbance Avoidance and Mitigation Strategy (RAMS), which is a means of facilitating residential development whilst at the same time adequately protecting Suffolk's coastal, estuarine and heathland European wildlife sites from harm. New residential growth brings new residents to the local area, and if those residents use European sites for recreational uses (as evidence suggests they would), there would be an increase in pressure on the European sites and the species and habitats found here, potentially resulting in a likely significant effect. The RAMS provides a suite of measures that work together to enable confidence that additional recreation pressure can be appropriately managed, and consists of:

1.3.4 These measures are mainly funded by contributions from developers, where their developments would have an effect on the European sites. Given the cumulative nature of the impact of residential development on European sites and the need to implement and monitor measures that are strategic in nature, it would not be viable to only pursue avoidance or mitigation measures based on individual sites on a piecemeal basis. The success of the avoidance and mitigation measures is reliant upon an overarching strategy that has regard for all residential development in combination. The RAMS is such an approach. Any other approach would not be considered to be viable or a 'reasonable alternative' in terms of the SEA Directive requirements, as it would not give certainty in successful delivery.

1.3.5 The HRA has objectively ruled out a likely significant effect on a European site caused by proposals in the Plan either individually or cumulatively.

1.4.1 In February 2017 the Council Adopted the Local Plan 2011 – 2031. The Council is now preparing a Review of the Local Plan to replace the Adopted Plan, which will look ahead to 2036. The Council is aligning its Local Plan with the Local Plans for Babergh District, Mid-Suffolk District and Suffolk Coastal District (now part of East Suffolk Council) Councils – the other authorities that form the Ipswich Housing Market Area and Ipswich Functional Economic Area (FEA). The emerging Final Draft Ipswich Local Plan will help to shape the future growth and development of the Borough and the economic, social and environmental relationships between the Ipswich Strategic Planning Area (ISPA) authorities. There are cross boundary issues that are relevant to the development and future of the Borough, the urban area of Ipswich and its surrounding areas. This has long been recognised with the identification of the 'Ipswich Policy Area', which has been extended and renamed as the ISPA. The geography of the ISPA now equates with the Ipswich Housing Market Area and the Ipswich Functional Economic Area, which both extend over the whole of Ipswich Borough, and Babergh, Mid Suffolk and part of East Suffolk Council. An ISPA Board, consisting of councillors and officers from Babergh, Mid Suffolk and East Suffolk District Councils, Ipswich Borough Council and Suffolk County Council, is a key vehicle for cross boundary planning in the ISPA.

1.5.1 The final draft local plan is presented in two documents:

1.5.2 This SA Report presents the results of predictions and evaluations of the sustainability effects of the policies and sites within both documents, including cumulative and synergistic effects. The Core Strategy document presents the Council's Vision and Objectives, as well as Strategic Policies, for the Borough to 2036.

1.5.3 The Site Allocations and Policies document presents a range of policies, most of which allocate sites in the Borough for certain types and scales of development, deigned to help ensure that the Borough's development needs up to 2036 can be met. 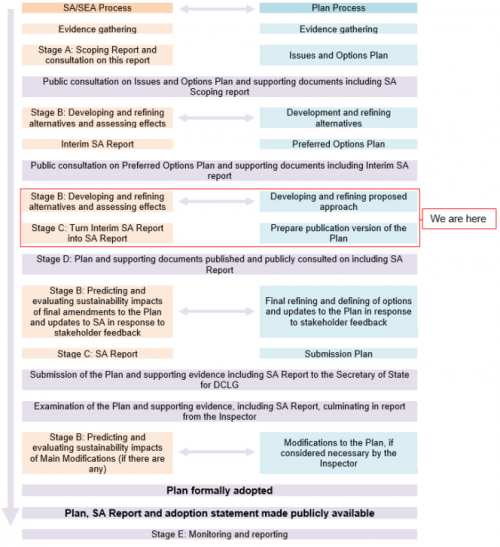