Part A The Context

2.1 The Ipswich Local Plan consists of two development plan documents (DPDs), supported by policies maps. The DPDs for Ipswich are the adopted Core Strategy and Policies Development Plan Document Review and the adopted Site Allocations and Policies (incorporating IP-One Area Action Plan) Development Plan Document. In addition to the Local Plan, there are other planning documents for Ipswich:

2.2 The Council's adopted Core Strategy and Policies Development Plan Document Review sets out a Borough-wide growth strategy up to 2031 in terms of numbers of homes and jobs needed and also the spatial distribution of growth. The Core Strategy Review favours brownfield development early in the plan period, in order to maintain the momentum of urban regeneration around the Waterfront. Greenfield development becomes progressively more significant throughout the plan period. The Core Strategy Review identifies the Northern Fringe of Ipswich (known as the Ipswich Garden Suburb) as the main area for housing growth on greenfield land.

2.3 The adopted Site Allocations Plan provides the detailed policies, which give effect to certain strategic policies of the Core Strategy, including policies CS7 (housing) and CS13 (employment). The two development plan documents together form the Ipswich development plan. Proposed development is assessed against all relevant policies contained within the two plans. Both plans are under review to extend their timescale to 2036.

2.4 The national context for the Ipswich Local Plan is provided by the National Planning Policy Framework (NPPF). It was revised in July 2018 and February 2019. One of the tests of soundness for development plan documents is consistency with the policies in the NPPF[2]. In addition, Planning Practice Guidance is published by the Government to provide more detailed advice to local planning authorities.

2.5 The Site Allocations Plan incorporates the IP-One Area Action Plan. Core Strategy Review policy CS3 commits the Council to preparing the Area Action Plan to implement the spatial strategy of urban renaissance. Therefore the key elements of the IP-One Area Action Plan have been incorporated into this Site Allocations Plan. The area covered by IP-One is indicated on the map below. It includes areas known as the Waterfront, Portman Quarter (previously called Ipswich Village), the Education Quarter and the town centre. It was defined as an area where significant change is expected during the plan period. Policies applying within the IP-One area and the boundaries of the areas referred to above are shown on an IP-One inset policies map. 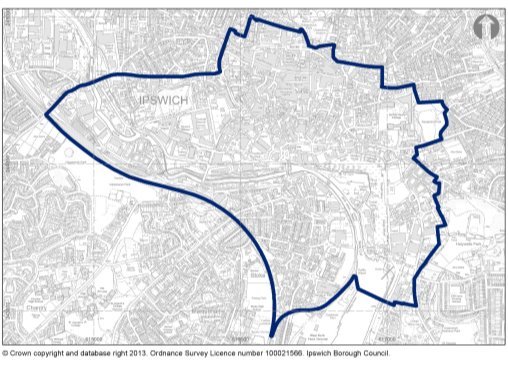 2.6 IP-One consists of 301 hectares (just over 3 square kilometres) of low-lying land adjacent to the River Orwell. The ground rises to the north, east and south to ridges, which in many places are wooded and provide a distinctive and attractive green backdrop to the central area. The River represents a positive focus for regeneration, but also something of a barrier to movement, both north-south and east-west. The area includes two large conservation areas - Central (1) and Wet Dock (11) – and the smaller Stoke Conservation Area (9) and a small part of the St Helen's conservation area (6).

2.7 The IP-One area divides into several identifiable areas of activity: the Central Shopping Area where retailing is the dominant use; the wider town centre where leisure (such as Ipswich Town Football Club) and office uses predominate; the Waterfront with its mix of commercial, leisure, port-related and residential uses; Portman Quarter in the west of IP-One which is a mixed-use neighbourhood primarily of homes and offices, and the Education Quarter in the east where the new University of Suffolk and Suffolk New College are the main land uses. There is a degree of overlap between some of the areas.

2.8 The Council is required to keep under review matters which may be expected to affect the planning and development of the Borough[3]. Thus a body of evidence underpins the Final Draft Core Strategy and the Final Draft Site Allocations Plan. Key elements of the local evidence base include:

2.9 These documents and others may be found on the Council's website www.ipswich.gov.uk within the Planning Policy Core Document Library and on the page entitled New Evidence Base Documents for the Ipswich Local Plan Review to 2036.

2.10 The key strategic challenges for Ipswich are identified in the Core Strategy Review paragraph 5.25. Some of the more detailed issues emerging from the evidence, which this plan needs to address, are as follows: