(1) 6.1 Six Opportunity Areas have been identified within the IP-One area defined on the map in Figure 1 in Chapter 2 (see list below). They are areas where there are clusters of development opportunities, which together present an important opportunity to enhance the townscape and public realm. The Opportunity Area descriptions, development principles and plans which follow will act as concept plans to guide the development expected to take place.

6.2 The number of opportunity areas has decreased from twelve identified in the Preferred Options IP-One Area action Plan published in November 2007. The reduction in number follows a re-assessment of the site opportunities available within the Opportunity Areas. Some have been deleted because of concerns over their deliverability and some because they have now been developed. The Opportunity Areas which have lost most or all of their site opportunities have been deleted or merged with ones which remain.

6.3 For each Opportunity Area two plans are included: the first is a site analysis plan and the second a plan to illustrate the development options and design guidelines. 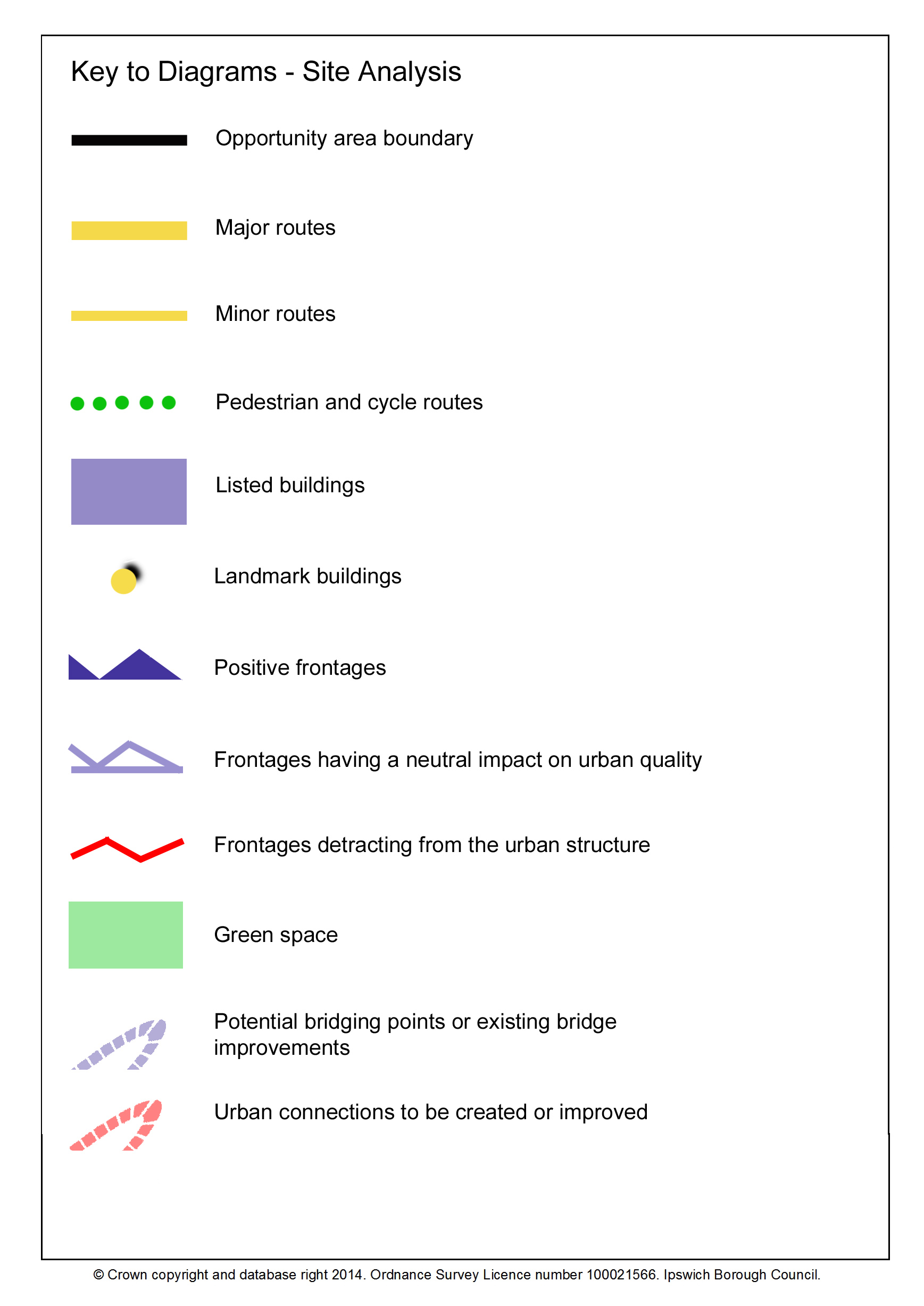 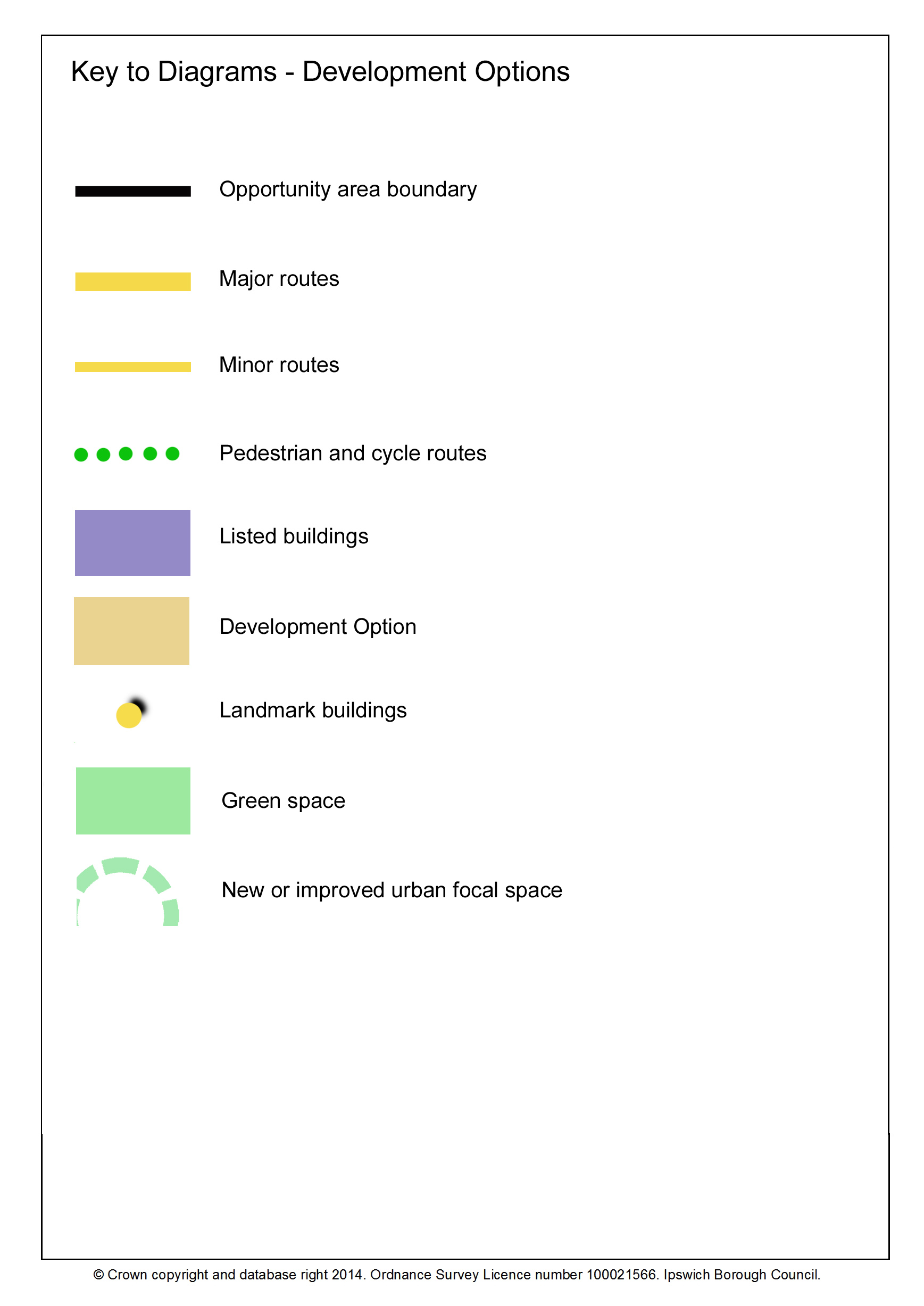 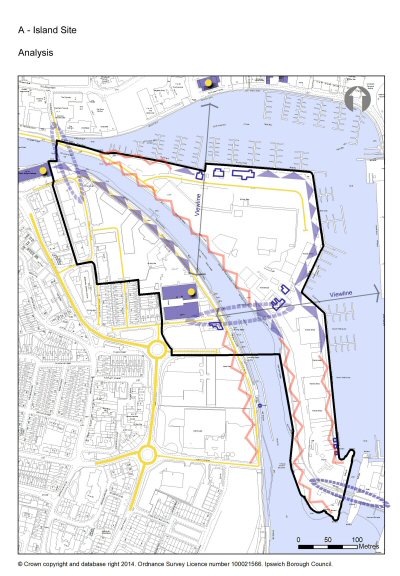 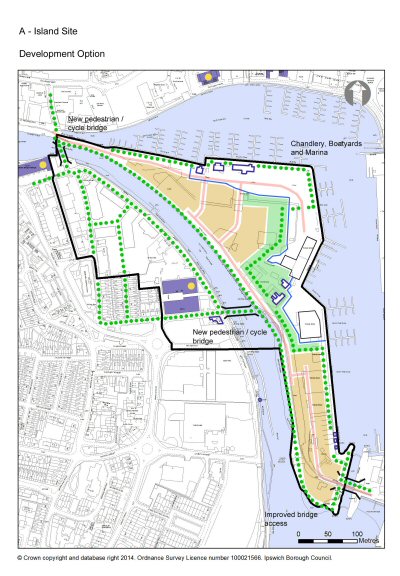 The Island is located in the heart of the Ipswich Waterfront on land that was reclaimed when the Wet Dock was constructed over 150 years ago creating an island linked to the 'mainland' by a narrow connection at St Peter's Dock. In recent decades the usage of the Island has changed as industrial port activities have given way to leisure uses based around the development of the marina. The Island represents a key development opportunity in the regenerated Waterfront.

The development of the Island site can contribute in a variety of ways to the regeneration of the Waterfront area. It is appropriate for provision of low to medium rise development which would maintain the essential character of the Wet Dock Conservation Area and protect significant views across from the outer edges of the Waterfront. Space is available to provide some much needed green areas including reinstatement of the tree lined promenade. The old lock gate area provides a natural focus for leisure uses while there is still space for further development of marina related activity.

West of the New Cut, opportunities exist for new mixed use development which can enhance the setting of historic buildings such as Felaw Maltings and the use of the quayside promenade and historic connecting routes such as Great Whip Street and Felaw Street. 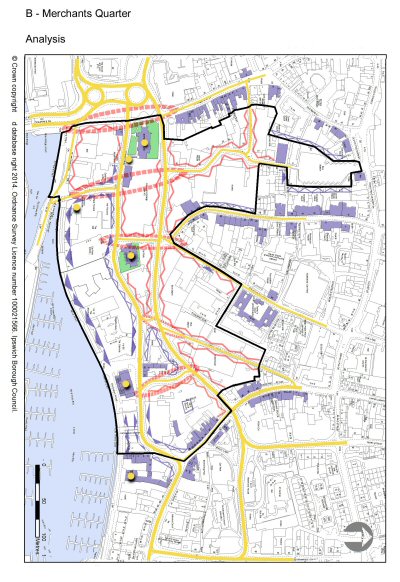 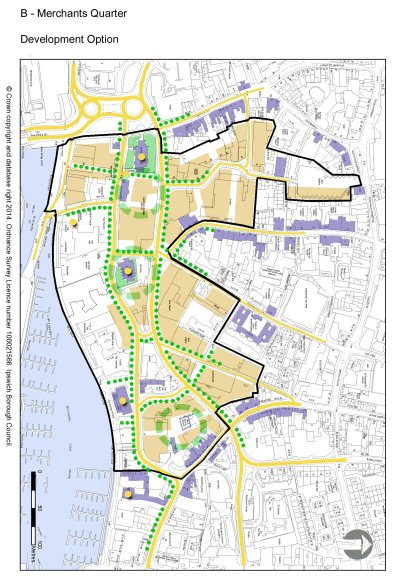 The area between the Wet Dock and the Central Shopping Area presents an opportunity to improve the links between the regenerated Waterfront area and the centre of town. The area includes several vacant and underused sites, the redevelopment of which would knit the area together from its present fragmented state.

Having undergone a period of development which has regenerated the Northern Quays, progress has now stopped, leaving a number of unfinished developments and gap sites. There are still issues of lack of connectivity between the Waterfront and the traditional Town Centre. The area between the old centre and Star Lane contains a network of streets, chiefly running north-south, but the linkage between this area and the Waterfront is affected by the barrier presented by the Star Lane gyratory road system. There is a poor quality environment in some parts of the area with several underused/vacant sites. Linked with proposals to lessen the impact of the Star Lane corridor, opportunities exist to reinforce the existing historic character and street pattern, promote improved pedestrian connection through and across the area, and migration of activity between the Town Centre and the Waterfront with the redevelopment of these underused/vacant sites. This area includes much of the internationally important area of the Anglo-Saxon and Medieval town and waterfront, including scheduled monuments and will involve considerable commitment of resources to archaeology. 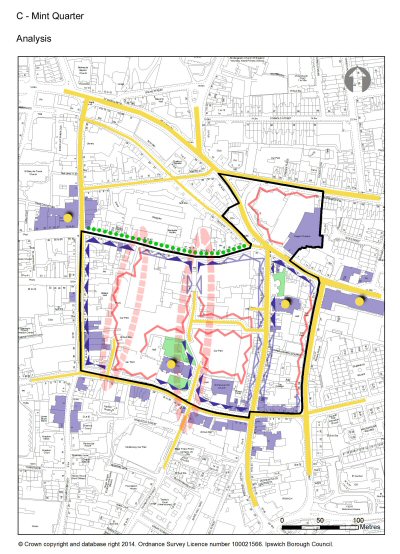 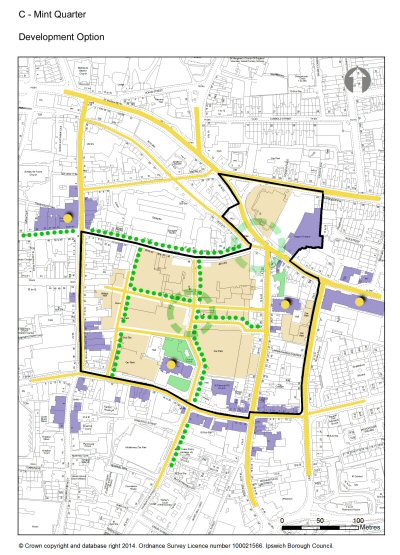 The 'Mint Quarter' is the name which has been applied to the proposed redevelopment area located within the block bounded by Carr Street, Upper Brook Street, Tacket Street/Orwell Place and Upper Orwell Street. Redevelopment of the Mint Quarter represents an opportunity for a mix of predominantly non-retail uses. Existing areas of surface parking will be replaced by a multi-storey short stay car park and redeveloped urban blocks with a legible layout of streets and public spaces. Development of the area will promote the residential-led regeneration of the adjoining peripheral shopping streets and much needed improvements to the public space at Major's Corner.

Development of the main Mint Quarter area should be based around a continuation of the historic urban block structure, with a new pedestrian spine forming a continuation of Butter Market linking through to a new urban square located on the historic north-south route of Cox Lane. Ancillary routes should link through to the main routes enclosing the wider block and to acknowledge historic routes and features as appropriate. Residential accommodation should be provided at upper floors to provide an appropriate form and scale of development. 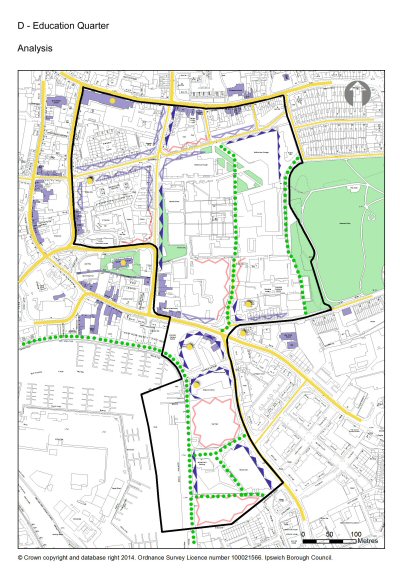 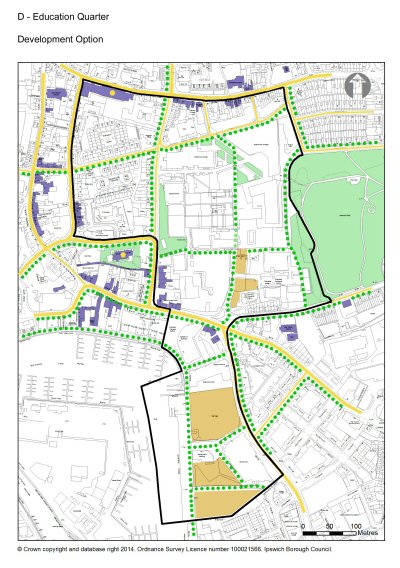 The 'Education Quarter' is located on the eastern side of the town centre, extending from just north of Rope Walk down to the Waterfront. It includes the higher and further education sites occupied by University Campus Suffolk and Suffolk New College. The area also includes existing residential, commercial and leisure uses, which have the potential to create a vibrant mixed use quarter, providing a major activity node and linking the Town Centre, the Waterfront and the eastern side of the town.

The major investment associated with further UCS and SNC developments will not only lead to a physical reinvigoration of the area, with quality new buildings and public spaces, but will also generate increased activity levels and prosperity in the area, which can support spin off employment and service activities. 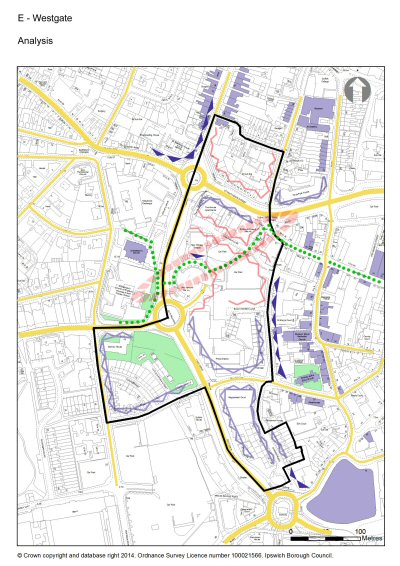 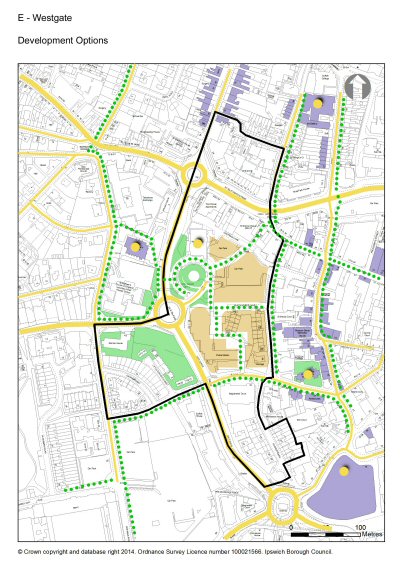 Fringing the western end of the Town Centre, the 'Westgate' quarter is a mixed area with a varied collection of retail, business, civic, cultural and residential uses. To the west of the area, Civic Drive presents a barrier to linkage between the Town Centre and the inner suburban areas. With the demolition of the Civic Centre and the long standing need for regeneration of the area to the north of St Matthew's Street, there is a significant opportunity to reinvigorate the area, with better integration of pedestrian movement and a more coherent built character.

Redevelopment of the former Civic Centre complex would form the centrepiece of a regenerated "Westgate" built around an enhanced pedestrian link through the site from the end of Westgate Street to a reactivated space in front of the New Wolsey Theatre. The barrier to pedestrian movement formed by Civic Drive and the series of underpasses beneath the St Matthew's Street roundabout would be addressed by new surface level crossings as has been done at the Friars Street Princes Street end of Civic Drive as part of the Travel Ipswich scheme. There is the potential to enhance pedestrian links northwards across St Matthews Street, connecting with the Ipswich Museum site which has been identified for major investment. Existing developments of inappropriate scale would be replaced by new development of a scale more befitting their town centre location. 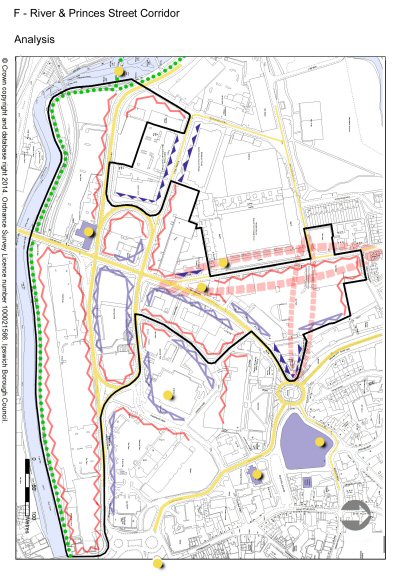 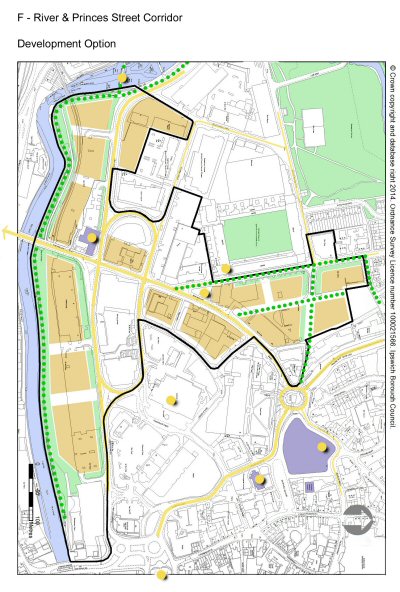 The 'River Corridor' occupies the large area to the north of the river in the vicinity of the railway station while the 'Princes Street Corridor' links the station to the centre of town. The riverside area is low lying and formed a fertile, grassy edge to the main settlement area since early times. Medieval watermills were replaced in the 19th century by waterside industries and the cattle market, then the road link to the railway station and Ipswich Town Football ground. The two corridors include many underused or vacant commercial sites, with a generally poor environmental quality and very fragmented townscape. Regeneration within the area presents an opportunity to consolidate the urban form either side of the important route from the railway station to the town centre, creating an attractive gateway to Ipswich and high quality public realm. The riverside connection to the Waterfront area can be enhanced as a setting for new pedestrian and cycle links.

The area of car parking to the east of Portman Road has potential to be redeveloped as a mixed use (predominantly office) environment, reconnecting the edge of the town centre to the east with inner urban housing and parkland to the west.