5.4 Deprivation issues are the result of different combinations of factors that may include higher than average proportions of elderly residents, high unemployment; lower-than average skill level; income deprivation or crime. For example unemployment in Ipswich is higher than that for the eastern region as a whole and the national average, while areas with higher than average pensioner households have implications for the future distribution of health and social care. 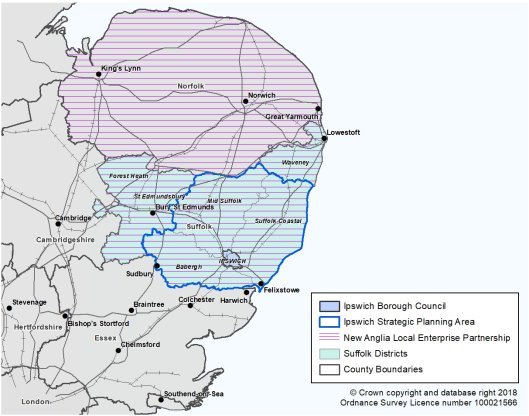 5.6 As an engine of growth for the East of England, Ipswich has a thriving commercial sector, ICT sector linked to Adastral Park, business and financial services sector and a significant port. It is a centre for education, including the University of Suffolk on the Waterfront, which offers a programme of teaching and research in key sectors. Ipswich also provides a wide range of cultural, sporting and retail provision, which serves the needs of the sub-region. The town has a diverse and multi­cultural population, and is one of the fastest growing urban centres in the UK.

5.7 Ipswich is developing dynamically and prosperously and has strong prospects for growth. Finance, IT and business activities account for one quarter of the workforce, with a similar proportion for distribution, hotels and restaurants, the latter demonstrating the role of Ipswich in sub-regional tourism and the strong night-time economy. This growth is supported at a central, sub-regional and local government level, enabling Ipswich to develop while acknowledging the sense of place established by many historic buildings and areas and its large landscaped parks. Partners have agreed a Greater Ipswich City Deal with the Government with a focus on tackling skills levels and low wages.

5.9 Table 1 below sets out some of the town's vital statistics:

5.10 Much of the recent development in the town has been focused around four key central areas: the Waterfront, Portman Quarter, town centre and Education Quarter.

5.11 Ipswich Waterfront in the 19th Century was briefly the largest wet dock in England. Today it is the location for the largest single regeneration project in the East of England and the focus of huge commercial, cultural and institutional investment such as the regional home for Dance East and the University ofSuffolk. New buildings benefit from being immediately south of the town centre and connected to it by attractive historic streets. This investment has assisted in the provision of jobs, new housing and educational opportunities.

5.14 To the south-west of the central area, Portman Quarter offers a further choice of employment and residential sites. This is already the location of headquarters for Ipswich Borough Council, Babergh and Mid Suffolk District Councils and Suffolk County Council as well as Suffolk Life, Ipswich Crown Courts, Ipswich Town Football Club, Birketts LLP and AXA Insurance among others. This location is well placed for further commercial and institutional uses because of its close proximity to the town centre, the Waterfront and Ipswich railway station.

5.15 In April 2007 a town centre Business Improvement District (BID) was established, called Ipswich Central. The company has been established to manage the town centre in a new way and bring investment into the retail heart of Ipswich to benefit businesses, residents and visitors. Ipswich Central has the twin aims of promoting and managing the town centre. Through the Ipswich Vision partnership project, it aims to work with stakeholders to create a successful county town centre.

5.16 A particularly exciting development for Ipswich was the establishment in September 2007 of a new Education Quarter for the University Campus Suffolk, established on and closely related to the Waterfront. This area is the focus of more than £150m investment which brought a brand new campus to the centre of Ipswich in an innovative partnership between the University of Essex and University of East Anglia. Its landmark building on the Waterfront opened in 2008 followed by Athena Hall, a student accommodation block in 2010 and the James Hehir building in 2011. In August 2016 the University gained independence as the University of Suffolk.

5.20 Although recent redevelopment of tall, late 19th and 20th Century industrial buildings around the Waterfront has emulated the height of these buildings, this has principally been confined to the area of the northern quays to the south of the historic core of the town centre.

5.25 Over the plan period to 2036 the issues and challenges mainly stem from how Ipswich can manage and gain best advantage from the significant growth that is taking place:

5.26 Table 2 below identifies a series of key issues which the Ipswich final draft Local Plan will seek to address where practicable as identified through the Sustainability Appraisal Scoping Report.