(1) 5.2 Ipswich is the county town of Suffolk and a major centre of population, economic activity and growth in the Eastern Region.

It is a member of Regional Cities East, an alliance of Ipswich, Norwich, Peterborough, Luton, Colchester and Southend-on-Sea. The towns and cities collaborate to deliver sustainable economic growth, examples of which include raising skills levels and improving infrastructure.

It is a key centre in the New Anglia Local Enterprise Partnership region covering Norfolk and Suffolk. Map 1 below shows Ipswich in context.

5.3 The town performs a regional role in delivering growth and performing as a major employment, shopping and service centre, and a focus for transportation. There is in Ipswich also an ongoing need for regeneration to address pockets of deprivation in some of the disadvantaged and physically more run down areas of the town. DELETED: The regional role of Ipswich and its local challenges are recognised in the town’s East of England Plan designations (see Chapter 3).

5.4 Deprivation issues are the result of different combinations of factors that may include higher than average proportions of elderly residents, high unemployment; lower-than average skill level; income deprivation or crime. For example DELETED: while unemployment in Ipswich DELETED: has generally been at the national average, it is higher than that for the eastern region as a whole INSERTED: and the national average, while areas with higher than average pensioner households have implications for the future distribution of health and social care.

(2) 5.5 Ipswich also lies within the Haven Gateway sub-region. The Haven Gateway is a sub-region based on the strength of the two main towns of Ipswich and Colchester together with the towns of Felixstowe, Clacton and Harwich, and the major ports at Felixstowe, Ipswich, and Harwich. Within this sub-region Ipswich is a key economic driver, delivering substantial housing and jobs growth. Map 1 below shows Ipswich in context. 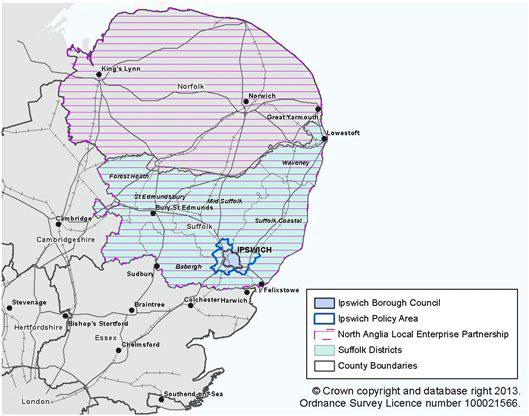 5.7 As an engine of growth for the East of England, Ipswich has a thriving commercial sector, high levels of entrepreneurship and a wide range of skills within the workforce. However the range of types of employment has changed in recent years, with half the manufacturing jobs in Ipswich being lost between 2001 and 2007. Ipswich also provides a wide range of cultural, sporting and retail provision, which serves the needs of the sub-region. The town has a diverse and multicultural population, and is one of the fastest growing urban centres in the UK.

(1) 5.8 As a university, maritime, telecoms and financial industries centre, Ipswich is developing dynamically and prosperously. Finance, IT and business activities account for DELETED: almost one- quarter of the workforce, with a similar proportion for distribution, hotels and restaurants, the latter demonstrating the role of Ipswich in sub-regional tourism and the strong night-time economy. This growth is supported at a central, DELETED: regional INSERTED: sub-regional and local government level, enabling Ipswich to develop while acknowledging the sense of place established by many historic buildings and areas and its large landscaped parks.

5.9 The town has strong transport links. Train services provide access to London in just over an hour and links to Norwich and Peterborough but the network also serves the East Coast and Felixstowe, all essential routes for containerised freight. Ipswich is also closely connected to the trunk road network with the A12 giving access to London, the M25 and Stansted Airport and the A14 linking the Midlands and the Port of Felixstowe. Nevertheless, there are congestion problems within the town and the plan will need to address these.

(1) 5.10 The table below sets out some of the town’s vital statistics:

5.11 Much of the recent development in the town has been focused around four key central areas: the Waterfront, Ipswich Village, town centre and Education Quarter.

5.12 Ipswich Waterfront in the 19th Century was briefly the largest wet dock in England. Today it is the location for the largest single regeneration project in the East of England and the focus of huge commercial, cultural and institutional investment such as the regional home for Dance East and University Campus Suffolk. New buildings benefit from being immediately south of the town centre and connected to it by attractive historic streets. This investment has assisted in the provision of jobs, new housing and educational opportunities.

5.13 Progressive regeneration is creating space for a vibrant new cultural, residential, business and leisure area, complementing the existing marina facilities. Along the northern and eastern quays in particular former industrial uses and tall storage silos are being replaced with new architecture in a variety of styles and materials. Generally the new buildings reflect a similar scale and do not detract from those parts of the historic core that extend down to the Waterfront. These strikingly scaled new buildings have largely created their own special character.

5.14 The large scale regeneration of Ipswich Waterfront has also encouraged new interest from businesses. On the western bank of the river, Felaw Maltings and the IP-City business centre are both now in demand for their top quality business space, providing facilities for over 800 workers. On the Waterfront itself, one of the town’s largest legal practices has chosen to relocate its offices into one of the converted 19th Century industrial buildings adjacent to the historic Old Custom House.

5.15 To the south-west of the central area, Ipswich Village offers a further choice of employment and residential sites. This is already the location of headquarters for Ipswich Borough Council and Suffolk County Council as well as Suffolk Life, Ipswich Crown Courts, Ipswich Town Football Club and AXA Insurance among others. This location is well placed for further commercial and institutional uses because of its close proximity to the town centre, the Waterfront and Ipswich railway station.

5.16 In April 2007 a town centre Business Improvement District (BID) was established, called Ipswich Central. The company has been established to manage the town centre in a new way and bring DELETED: £3.2m of investment into the retail heart of Ipswich to benefit businesses, residents and visitors. BID improvement projects are grouped under six themes: Safe and Secure, Clean and Bright, Out and About, Target and Tell, Look and Feel, and Aims and Ambitions.

(1) 5.17 A particularly exciting development for Ipswich was the establishment in September 2007 of a new Education Quarter for the University Campus Suffolk, established on and closely related to the Waterfront. This area is the focus of more than £150m investment which has brought a brand new campus to the centre of Ipswich in an innovative partnership between the University of Essex and University of East Anglia. Its landmark building on the Waterfront opened in 2008 INSERTED: followed by Athena Hall, a student accommodation block in 2010 and the James Hehir building in 2011.

5.19 The Physical Development of Ipswich

5.20 Ipswich is a large town of great historic importance. The town centre, by an accident of topography, retains the physical character of a much smaller market town. This is partly because the prevailing scale of the town centre is still predominantly that of its medieval and earlier origins - rarely exceeding four-storeys in height - and partly because the town centre sits in a shallow drainage basin of the River Gipping with well landscaped Victorian developments and large parks which disguise the extent of modern development which extends beyond it, especially to the east.

5.21 Although recent redevelopment of tall, late 19th and 20th Century industrial buildings around the Waterfront has emulated the height of these buildings, this has principally been confined to the area of the northern quays to the south of the historic core of the town centre.

5.22 Historically, drainage constraints have inhibited development to the north of Ipswich and the character of the surrounding countryside infiltrates into the built-up area where Christchurch Park extends southward to the northern edge of the mediaeval core of the town. The former tidal basin that became the 19th Century Wet Dock also constrained the development of Ipswich with houses fanning out westward along the Gipping valley and over a largely flat plateau to the east.

5.23 These physical constraints and historical form of Ipswich have significant consequences for modern day traffic movement, particularly the location of Christchurch Park to the north of the medieval core and the Wet Dock and river to the south. All of these features are important to the character of Ipswich and as conservation areas are also major protected heritage assets. They in effect confine traffic to only three 'crossing- points': Colchester Road north of the park; Crown Street north of the core; and Star Lane - College St/Key Street north of the dock. Opportunities to radically change the traffic patterns within Ipswich are therefore significantly restricted by existing development and physical features.

5.24 Beyond the inner Victorian suburbs, Ipswich has developed in the 20th Century through large scale, almost entirely two-storey inter-war and post war suburban development. Whilst there are some notable exceptions, much of it is of indifferent architectural quality and lacks the landscaping and open space that would have helped establish a strong localised sense of place.

5.27 The combinations of indicators of deprivation vary from one electoral ward to another, but will have implications for the location of, for example, types of educational provision, play-space, jobs and healthcare.

5.28 Some of the challenges for individual wards include:

ALEXANDRA
concerns about crime, deprivation among older households and higher than average unemployment;

CASTLE HILL
a high proportion of older households and average or below average skill levels;

GIPPING
the ward with the highest overall deprivation rate in Ipswich and with high levels of crime;

PRIORY HEATH
low levels of qualifications and low incomes and with a higher than average crime rate;

WESTGATE
high levels of unemployment; low proportions of young people in education and higher than average rates of crime;

WHITEHOUSE
low levels of qualifications at all levels, long-term unemployment and crime; and

5.29 One element of deprivation relates to educational attainment and this is a key area that University Campus Suffolk (UCS) will help to address. The aims of UCS include increasing the numbers of local students who go on to university and to retain graduates in this area. The achievement of these aims will help significantly in increasing skills levels and earnings, and makes the success of the UCS project a key strategic priority for the town.

5.30 Key challenges for Ipswich over the Plan Period

(3) 5.31 Over the plan period to INSERTED: 2031 DELETED: 2027, the issues and challenges mainly stem from how Ipswich can manage and gain best advantage from the significant growth that is taking place: